In this section you will find all kind of different technologies regarding the Mono- and TriVista Systems.
Basically everything found here can be implemented in our systems.

This section is still under construction and will be expanded in the near future.

Atomic force microscopy is is tool for surface characterization of materials. It offers resolution in the range of under a nanometer and helps to understand the topology of examined samples. It works with a small tip, the cantilever, that moves slowly above the surface of the sample. Most commonly the the movement of the tip while it is scanning is measured with an optical sensor. There are several working modes of AFMs e.g. contact and non-contact mode.

There is also an aproach to combine both raman spectrosocpy and atomic force microscopy. The Tip-enhanced Raman spectroscopy (TERS). The laser can be focused on special cantilevers so the tip guides the light to the sample. This highly increases the spatial resolution of the raman signal in the region of a few nanometers. S&I supports the AFM solution of Nanonics, JPK and CSI.

Cooling stages are used to examine the temperature dependency of PL or raman signals. The easiest way for temperature measurements are liquid nitrogen cooled stages. They offer a temperature range from –196°C up to 600°C. They can be placed directly under the microscope objectives and are easy to use. S&I supports stages from Linkam and Oxford instruments. But also many other solution are possibly on request. 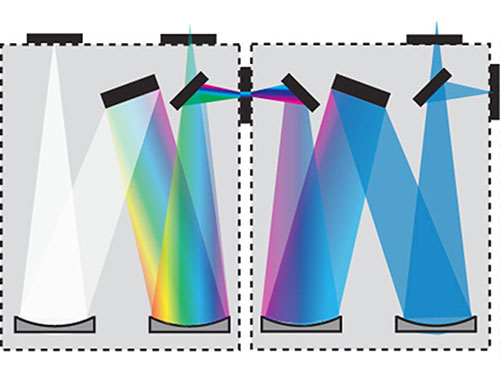 The triple spectrometer has similar purposes as the double spectrometer. Adding a third stage has several benefits. In addititve mode even more dispersion is added resulting in a ver high spectral resolution. In subtractive mode the triple spectrometer is able to analyze very specific ranges of the spectrum. Combined with a raman setup no additonal filters are needed because the rayleigh scattering can be removed through the bandpass of the subtractive mode. Also low frequency measurements in the range of below ten wavenumbers can be achieved.

Raman spectrosocopy has become one of the most important tools to analyse a wide range of samples of any kind. Because nearly no sample preparation is needed and its non destructive nature raman spectroscopy is used in Biology, Physiscs and chemistry all alike.

The Raman effect is the inelastic scattering of light. The light interacts with the sample which emmits light with a shifted wavelength compared to the exitation light.

Raman Spectroscopy is a non destructive measurement method which can be used to measure nearly every kind of samples like solids, gases and liquids. Its easy to use and a lot of sample information like charactarisation, bondings or stress of solids can be obtained by raman spectroscopy.

TCSPC stands for “Time corellated single photon counting”. It is a technique to achieve time resolved measurements of photoluminescence or even raman signals. The time resolution can go in the range of picoseconds. TCSPC is based on a pulsed lght source which will cause an emmission of the sample. At the same time a sync-signal is needed to get a time correlated histogram of the counted photons from the sample. This technique is mostly used for lifetime determination of fluorescence signals and requires very specialized equipment. The main components are:

TCSPC can be added to all of our S&I products. We support the TCSPC-Solutions from “Becker und Hickl” and “Picoquant”.